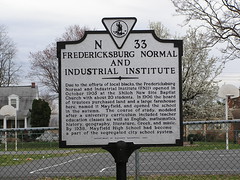 Due to the efforts of local blacks, the Fredericksburg Normal and Industrial Institute (FNII) opened in October 1905 at the Shiloh New Site Baptist Church with about 20 students. In 1906 the board of trustees purchased land and a large farmhouse here, named it Mayfield, and opened the school in the autumn. The course of study, modeled after a university curriculum included teacher education classes as well as English, mathematics, history, geography, literature, Greek, and music. By 1938, Mayfield High School had become a part of the segregated city school system.

Extended Research
The Fredericksburg Normal and Industrial Institute was a secondary school for African Americans in the Fredericksburg area. It was founded through the efforts of Samuel A. Brown, the Shiloh Baptist Church, Jason C. Grant, Joseph Walker, and avid Black civic and educational leaders from the surrounding areas in early September of 1905 (Russell 90). The school started its humble beginning in the basement of the Shiloh New Site Baptist Church. The Fredericksburg Normal and Industrial Institute became the first black high school in the Fredericksburg area and was open to any student who wanted to attend (Cunningham 6). The original board of trustees consisted of several church leaders: Samuel A. Brown held the role of President, Jason C. Grant was secretary, and Joseph Walker was chairman (Russell 91).

Even from conception this school was a great success. Black students from surrounding counties traveled long distances to take part in this education. A monumental part of the early achievements of this Institute were due to the widespread Black Baptist connection to civil rights involvement. After the school year began, it became clear to the board of trustees that the school needed a permanent residence of its own and could not operate effectively or grow to the magnitude that they all hoped it would in the basement of a church. For twelve hundred dollars the board of trustees purchased the new site. The land and farmhouse were entitled “Moorefield” when it was purchased from the Virginia Trust Company, but the name was changed to the more pleasant sounding, “Mayfield” (Russell 92). The farm was located just south of the city of Fredericksburg (Johnson 10). 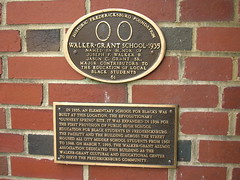 The school was referred to by two names, both the Fredericksburg Normal and Industrial Institute and Mayfield High School, when it changed locations in 1906. This move from the Shiloh Baptist Church basement was a great step towards the eventual widespread success of the school. Technically, Mayfield was considered a private school, but this was only because it was not accepted as a part of the area school district.

Reverend James E. Brown of Shiloh Baptist Church served as the first non-teaching President of the school assisted by teacher-principal P.C. Whitely and J. William Moss. Later, in 1907, Reverend W. L. Ransome joined the staff. After Brown and Whitely retired, Moss took up the Presidency until 1909, when he too stepped down and Ransome filled the position. Ransome held the position up until 1913. Under Ransome’s presidency, the school nearly went under for financial reasons but was able to raise enough funds to stay afloat. Also during his presidency, Mayfield High School was accredited by the Virginia State Board of Education (Russell 94). 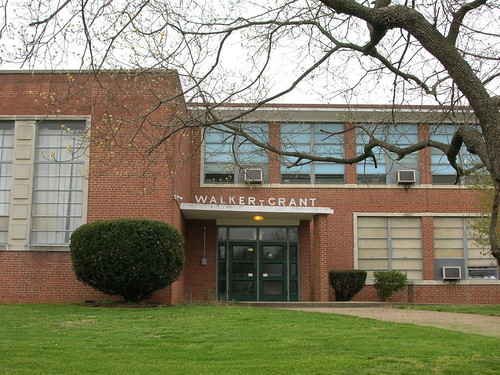 On November 1, 1938, the school was finally recognized as public and was given public school funding. This ended the thirty-three-year sole support from the Black Baptist community, and it also meant expansion (Russell 95). This was also the final year of Mayfield High School’s existence. At this point Mayfield, or the Fredericksburg Normal and Industrial Institute, merged with a primary school and became known as Walker-Grant School.

For Further Reference
Alexander, Fred. M. Education for the Needs of the Negro in Virginia. Washington, DC: The Southern Education Foundation, Inc., 1943.