Historical Marker Text
Historic Falmouth E-47 Founded in 1727 as a trading center for the Northern Neck. Hunter’s iron works here were an objective in the Virginia campaign of 1781. The Army of the Potomac camped here from November 1862 to June 1863 and moved hence to Chancellorsville and Gettysburg. [1927]

Extended Research
The town of Falmouth was incorporated in 1727. It was named for the seaport town in Cornwall, England. Falmouth became one of the most important trading centers in Virginia during the eighteenth and nineteenth centuries. Business and industry took over where Marlborough left off. In 1730, a tobacco warehouse was built and was soon joined by various factories (Eby 295). In this same year, Falmouth was designated an official tobacco inspection station, which gave the town a monopoly over shipments of tobacco (Felder, “Falmouth”). 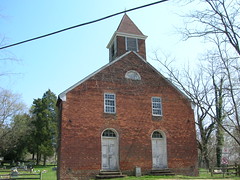 Home of Industry
Hunter’s iron works, located near Falmouth, was considered one of the best examples of iron manufactories in North America. Around the time of the American Revolution, the factory produced 600-800 tons of iron annually. It played a very important role in the Revolution. In fact, James Mercer wrote to Thomas Jefferson on April 14, 1781, that “it is from Mr. Hunter’s Works that every camp kettle has been supplied for the continental and all other troops employed in this State” (Darter, 103). In short, Hunter’s iron works was crucial to the success of the American Revolution.

By the 1830s, Falmouth boasted a flourmill, a cotton factory, and a nail factory (Eby 296). In addition to these industrial sites, Falmouth contained twelve general stores, one school, one Masonic hall, one druggist shop, and one non-denominational church (Darter 81). However, by the late 1840s, the Rappahannock River began to accumulate silt due to poor farming activities. This brought the end to shipping activities, the town’s lifeline. Falmouth faded from importance (296). 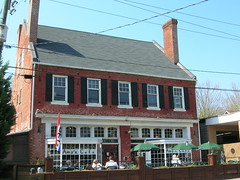 Union Headquarters
During the Civil War, Stafford County saw little fighting. However, Falmouth and other towns did play host to Union camps during the Battle of Fredericksburg. During this time, the town sustained heavy damage. “There was little or nothing for residents to return to after the war” (Eby 338). Generals French, Stimson, Grant, and Burnside were some of the Union leaders who made Falmouth their headquarters (338).