Historical Marker Text
Here is Chatham, built about 1750 by William Fitzhugh. Here Robert E. Lee came to court his wife. In the battle of Fredericksburg, December 13, 1862, the house was occupied by General Sumner. It was General Hooker’s headquarters for a time, 1863. [1928]

Extended Research
Early Chatham
Chatham was built between 1768 and 1771 by William Fitzhugh, and was named after William Pitt, the Earl of Chatham. The Georgian-style manor’s view from Chatham Heights commands the entire town of Fredericksburg, across the Rappahannock River. With numerous outbuildings and dependencies, Chatham was a prosperous plantation, with upwards of one hundred slaves. Due to the expenses of entertaining guests at his home, Fitzhugh was obliged to leave Chatham in 1796 and put it up for sale. In 1806, Major General Churchill Jones bought the plantation from Fitzhugh for $20,000 (National Park Service). Chatham stands out in part because of the famous visitors it has received. Among them were George Washington, who stopped by twice in the 1780s, and Thomas Jefferson, who visited in 1793. The estate is one of only three homes which were visited by both George Washington and Abraham Lincoln, who came in spring 1862 to meet with Union General Irvin McDowell. Robert E. Lee visited Chatham while it was owned by the Jones family, but, contrary to popular myth, he never courted his wife there (NPS).

Civil War
During the Civil War, Chatham was owned by James Horace Lacy, who had married Churchill Jones’s niece, and was known as the Lacy House. Lacy left home to join the Confederate Army of Northern Virginia when the war broke out, and his family vacated the premises when Union forces occupied Chatham beginning in April 1862. McDowell made Chatham his headquarters when he oversaw his forces in repairing the Richmond, Fredericksburg, and Potomac Railroad and building bridges across the Rappahannock (NPS). That November, General Ambrose E. Burnside, the Army of the Potomac’s new commander, brought the Union troops to Falmouth. After weeks of waiting for pontoons to arrive, they built pontoon bridges to cross the river into Fredericksburg. General Edwin Sumner observed the struggle from above at Chatham, as he was under orders from Burnside to not cross the river (O’Reilly 293). Battle of Fredericksburg that took place December 13, 1862, amounted terrible losses for the Union army, with 12,600 Union casualties, and the conveniently located Chatham was temporarily converted into a hospital for Union troops. For the next several days, hundreds of soldiers sought medical assistance inside Chatham, and army surgeons performed countless amputations and other operations. Among the volunteers who assisted them were the poet Walt Whitman, as well as Clara Barton, who would later establish the American branch of the International Red Cross. That winter, the Army of the Potomac, with well beyond 100,000 men, camped behind Chatham in Stafford County, where troops remained until the following spring. By the time they left, they had a new commander, General Joseph Hooker (NPS).

Aftermath
The Civil War left Chatham permanently changed. Graffiti littered its walls, wood paneling had been ripped from the walls for firewood, and there were telling bloodstains on the floor. The outside of the estate 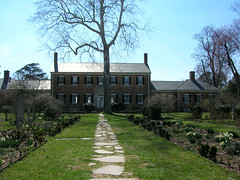 fared no better. The lawn was a graveyard for over 130 men, and troops had cleared the surrounding forests for fuel during the winter. The Lacy family could not keep up their estate and sold it in 1872. The home was not restored until the 1920s, by the efforts of then-owners Daniel and Helen Devore, who made key changes and brought it back its grandeur. In 1931, the Devores sold Chatham to industrialist John Lee Pratt. Pratt died in 1975, willing the estate to the National Park Service, and it is now a part of the Fredericksburg and Spotsylvania National Military Park. The grounds and five of Chatham’s ten rooms are open to the public for touring (NPS).