Historical Marker Text
Here is Aquia Church, the church of Overwharton Parish, formed before 1680 by the division of Potomac Parish. It was built in 1757, on the site of an earlier church, in the rectorship of Reverend John Moncure, who was the parish minister from 1738 to 1764. The communion silver was given the parish in 1739 and was buried in three successive wars, 1776, 1812 and 1861. [1932]

Extended Research
History of Aquia Church
After Stafford County was split from Westmoreland County in 1664, it was further split into two parishes that were eventually called Overwharton and Chotank. Aquia became 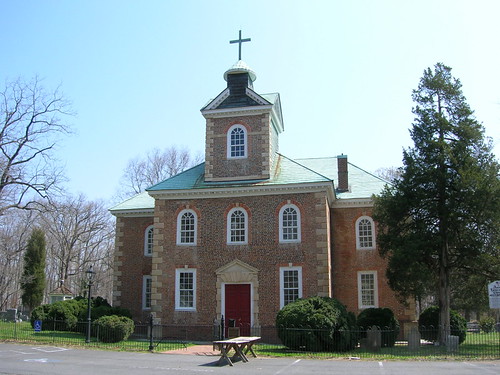 the church for the Overwharton parish. The building that rests on the site now, built in 1757, was the third church to be constructed there. The first one was built in 1667 and burned around the year 1700 (Finch).

Around the middle of the 1750s, plans for the building of the final church structure came under attack by residents who did not wish to pay the taxes to have it built. Many felt there was no need for an extravagant new church to be built on the site. They even went so far as to enlist the help of Lawrence Washington, half-brother to George Washington, who took their complaints to the House of Burgesses in 1745. These complaints were ultimately denied and Aquia Church replaced Potomac Parish as the main church in the parish.

Design
The church is one of the few colonial Virginian churches built using the true Greek cross structure (Eby). It contains brick on the outside while the doors are accented with sandstone from the local Aquia quarry. The interior has a three-tier pulpit and traditionally designed pews. Excluding the marble added to the steps, much of the structure is original. The lack of wealth in the community contributed to this, they were simply not able to pay for the extravagant renovations that destroyed many similar colonial churches in the 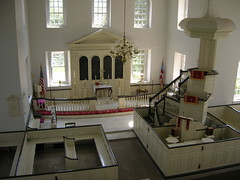 Original Communion Silver
The church still owns the original communion silver it used for its first masses. It was given to Aquia Church through the Reverend Alexander Scott’s will in 1738. The valuable silver was buried underground during the American Revolution, the War of 1812, and the American Civil War. Fortunately, each time it was recovered. The parish still uses the silver on special occasions (Finch).