Historical Marker Text
The crucifix by sculptor Georg J. Lober, erected in 1930, commemorates the first English Roman Catholic settlement in Virginia. Fleeing political and religious turmoil in Maryland, Giles Brent and his sisters Margaret and Mary established two plantations called Peace and Retirement on the north side of Aquia Creek between 1647 and 1650. Later, they jointly acquired 15,000 acres in Northern Virginia, including the site of present-day Alexandria. Their nephew George Brent, whose plantation Woodstock and family cemetery were located nearby, represented Stafford County in the House of Burgesses in 1688, the only Roman Catholic delegate in the colonial period. [1998]

Extended Research
History
Around 1650, the first Roman Catholic Settlement in Virginia was established by Giles Brent and his sisters Mary and Margaret Brent near Aquia Creek in Stafford. The Brent family was wealthy, and were distant cousins to Lord Baltimore, founder of the Maryland colony. Lord Baltimore intended Maryland to be a place of religious tolerance, where Protestants and Catholics could live together peaceably. By encouraging the Brents to move there, through promises of land, he was trying to further this experiment.

Margaret and her sister remained unmarried, despite the tremendous pressure at the time to do so. Men outnumbered women six to one, so they would have been pushed hard to marry (Carr). Because she was unmarried, Margaret was able to own land and conduct her own business in Maryland.

Margaret Brent is most famous for appearing before the Maryland assembly and demanding to vote on January 21, 1648. Her reasons for wanting to vote included her ownership of land and that she was also a legal representative for Lord Baltimore. She was refused, but it is unlikely that she expected to be granted the vote in the first place (Carr).

Giles Brent married Mary Kitomaquund. Mary was a Christian converted Native American, and was taught by Giles’s sister Mary. Kitomaquund, or Kittamaquad according to some, was the daughter of the leader of the Pscataway Indians. When her father died, Governor Calvert of Maryland took control of her estate, feeling that he was the rightful owner. Giles Brent sued Calvert for the rights to this property and won a payment of 7,000 pounds of tobacco, but Calvert refused to acknowledge Kitomaquund as the rightful successor to the Pscataway Indians. The Brents left Maryland, for Virginia, because they felt threatened by Calvert. (Goolrick 14)

There was already a Spanish missionary settlement established near Aquia, in Stafford 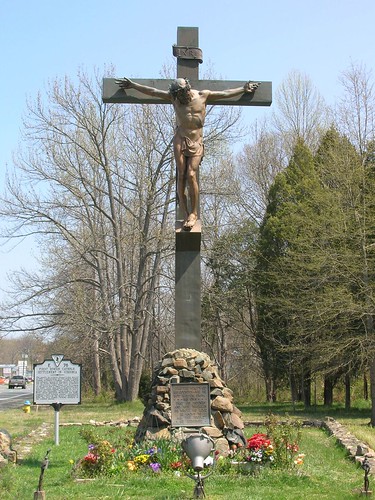 County. The Brents bought and established two plantations called Peace and Retirement. In 1785 the site had a population of nearly 200 Catholics. It was not until Thomas Jefferson established the Statute of Religious Freedom that Catholicism began to flourish in America (MacDonnel). The nearby Catholic parish of St. William of York claim ancestry through this first Roman Catholic Settlement (Lagan).

Marker Site
The site near the marker has an elaborate crucifix statue designed by Georg J. Lober. It was erected in 1930 and stands on Rt 1 in Stafford near Aquia.