Historical Marker Text
Organized in June 1825 by the Winchester Presbytery as Yellow Chapel Church, the brick church was constructed between 1857 and 1859. It became Hartwood Presbyterian Church in 1868. During the Civil War an engagement took place here on 25 Feb. 1863. Confederate Brig. Gen. Fitzhugh Lee, commanding detachments of the 1st, 2d, and 3d Virginia Cavalry Regiments, defeated a Union force and captured 150 men. The interior wooden elements and furnishings of the church suffered considerable damage during the war, but were replaced. The building was listed on the Virginia Landmarks Register and the National Register of Historic Places in 1989 and it is an American Presbyterian Reformed Historical Site. [2004]

Extended Research
History of the Church
The church was organized by William Irvine, a Presbyterian who left his native Ireland in 1803 because of religious persecution. After leaving Ireland, he settled in the Hartwood 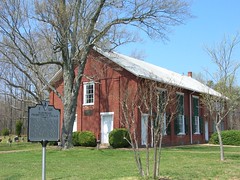 area of Stafford County, Virginia. The closest Presbyterian church was in Fredericksburg, so Irvine and other Presbyterians were interested in establishing a church that was closer to their homes in Stafford and the surrounding areas. Under the advisement of Winchester Presbytery, about forty members organized a new Presbyterian congregation on July 22, 1825. The congregation built their own church in 1858 at a cost of $2,000. Much of the construction of this building was done by parishioners, so the cost was much lower than it otherwise would have been.

Civil War
Like many of the churches in the area, Hartwood Presbyterian was occupied by both 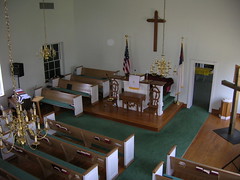 Northern and Southern troops. The Union Army occupied it for the most time. They set up camp there, causing great damage to the building by burning all of the wood used in its construction. Though it took some time because the war left the region very poor, the church was repaired between 1868 and 1872 through parishioners’ donations (Eby 357).