Historical Marker Text
Fredericksburg E-45. Fredericksburg was established in 1728 and named for Frederick Louis, Prince of Wales and eldest son of King George II. It served as the county seat of Spotsylvania County from 1732 to 1778 and was an important port during the colonial era. In his youth, George Washington lived nearby at Ferry Farm. He later spoke of the city’s influence on him. The town was devastated by fire in 1807 and again by the First and Second Battles of Fredericksburg that were fought here during the Civil War, yet many 18th- and 19th-century buildings remain and are listed on the Virginia Landmarks Register and the National Register of Historic Places. [2003]

Extended Research
Located below the falls on the Rappahannock River, Fredericksburg, VA has a long and astonishing history that stretches back over a hundred years before the American Revolution. The list of historically significant Americans that once called Fredericksburg home is far too long to list here. From its role in the American Revolution to the critical battle that played out here during the Civil War, the town has witnessed many of America’s major historical events.

Early Exploration
Virginia’s history began when John Smith landed at Jamestown in 1607. During his time in Virginia, he spent much time exploring the surrounding area. Smith led an exploring party down the Rappahannock River in August of 1608. Local Rappahannock Indians attacked the party twice as they made their way down the river. When they landed at the falls near present-day Fredericksburg, one hundred Mannahoack Indians attacked the settlers once again. It was during this attack that Smith and his party cared for a wounded native man named Amoroleck. Smith attempted to interview the man about the local geography, but was not very successful. Fortunately, due to Smith’s kind treatment of him, Amoroleck promised his tribe would be more receptive to settlers (Lemay 120-122).

On August 21, 1670, German explorer John Lederer arrived at the falls. He was accompanied by Colonel Catlet and five Indian guides. The group traveled the Rappahannock River to the Blue Ridge Mountains, where they drank brandy to the king’s health. Their journey was cut short by a spider bite that infected Lederer’s arm, and the party returned to their starting point in Port Royal (“John”). In his travel journal, Lederer remarked on the abundance of natural resources in the area that included various descriptions of local flora and fauna, observations of Native American agricultural products, and the possibility of salt mines (Darter 56). 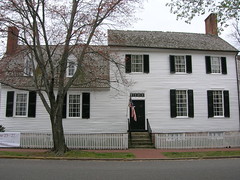 The First Settlement
Documented, permanent settlement began a year later, in 1671, when John Buckner and Thomas Royston were granted two thousand acres of land in the Lease Land Grant (Embrey 12). Forty settlers accompanied the two men in their establishment of the land known for a while as “Leaseland” (Goolrick 17).

The town, which was rapidly becoming important to the shipment of grain, received its official charter from the House of Burgesses, the Virginia government at Williamsburg, in 1727. It was named Fredericksburg, in honor of Frederick, Prince of Wales, son of King George II and father to George III. John Robinson, Henry Willis, Augustine Smith, John Taliaferro, Henry Beverly, John Waller, and Jeremiah Crowder were named as trustees. The town was plotted on a grid and the streets were named for members of the English Royal family. These street names still survive today and include Princess Anne, Prince Edward, Caroline, and Sophia streets (20).

The town continued to grow in importance and population. 1732 marked the establishment of the Spotsylvania County seat at Fredericksburg. The courthouse moved from Germanna to Fredericksburg, despite protests of Spotsylvania residents who wanted a more central location. That same year, St. George’s Episcopal Church was founded and its first church was built (21). In 1738, one of Fredericksburg’s most prominent citizens arrived in the area. The young George Washington moved with his family to a farm located across the Rappahannock, now referred to as Ferry Farm. He spent much time in the town and attended the parish school at St. George’s run by Reverend James Marye (Freeman 59). Masonry took root in Fredericksburg in 1752. In fact, George Washington was one of the first to join and remained a member of the Fredericksburg Lodge for the rest of his life (Willis 44). 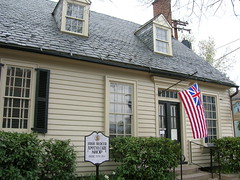 Prosperous Virginia planters built their plantations and magnificent homes in Fredericksburg. William Fitzhugh, one of the most well-known planters of the time, began work on his Georgian mansion, Chatham, in 1768 (Willis 46). Fielding Lewis, a wealthy planter and merchant, resided at Kenmore Plantation. The Thornton family established their estate at Fall Hill in 1736.

Fredericksburg during the American Revolution
Within a number of years, rumblings of dissatisfaction against their mother country could be heard among the colonists. Fredericksburg patriots often gathered at Weedon’s tavern, now referred to as the Rising Sun Tavern (Goolrick 23). Historian Oscar Darter claimed, “outside Williamsburg, the Fredericksburg neighborhood served as the hub of the American Revolution in Virginia” (Darter 187). On Wednesday, June 1, 1774, soon after the Boston Tea Party, Fielding Lewis, Charles Dick, James Mercer, and other Fredericksburg patriots gathered to create a resolution expressing sympathy for the residents of Boston. It was the first town in the area to create such a resolution and many nearby communities followed suit (188). Upon Lord Dunmore’s removal of the gunpowder in April 1775 from the magazine at Williamsburg, more than seven hundred men gathered in protest. The result of this massive meeting was the “Fredericksburg Resolutions,” which essentially called for independence more than a year before the Declaration of Independence (Goolrick 23).

Fredericksburg also gave material help to the patriots’ cause. By 1776, America’s first small arms manufactory was completed and began repairing and producing muskets to be used by Virginia regiments in the war for independence. The gun factory, owned and managed by Fielding Lewis and Charles Dick, was located on the outskirts of town and became a crucial part of the war’s success (Darter 104). The town also gave an “unusually large proportion of troops and many of the great leaders” (Goolrick 24). 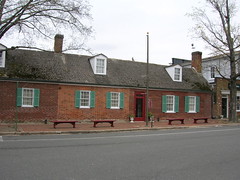 In the years after the Revolution, Fredericksburg’s focus returned to commerce. James Monroe moved to the town in 1787 to practice law (Willis 28). It was in Fredericksburg that Thomas Jefferson drafted the Virginia Statute for Religious Freedom in 1786. The document would later influence the inclusion of freedom of religion in the Bill of Rights (Darter 121). 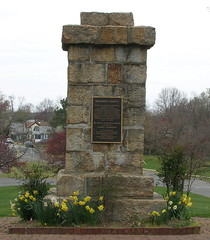 In October 1807, fire swept through the town, destroying stores, warehouses, and forty-five houses. The fire started in a private residence on the corner of Princess Anne and Lewis Streets. Flames roared through Caroline Street, all the way from Lewis Street to George Street, encompassing almost four blocks. Amazingly, no lives were lost. Most of the town was gathered just outside of town watching horse racing at “Willis’s Field” (Alvey 13-15).

Civil War
For most of the nineteenth century, Fredericksburg enjoyed peace and continued prosperity. The start of the American Civil War soon interrupted this. Due to its proximity to Richmond, Fredericksburg sustained heavy damage during the war. It changed hands seven times and was the site of heavy fighting during the Battle of Fredericksburg in December 1862. 17,000 soldiers were killed in the Fredericksburg campaigns (Willis 8).

In the aftermath of the Civil War, Fredericksburg worked to rebuild. Victorian homes went up on Prince Edward Street and Washington Ave. In 1908, the Virginia legislature established The State Normal School for Women, now known as the University of Mary Washington.

Historian Paula Felder put it best: “Perhaps no other town in America offers such a vivid glimpse of over two full centuries of history” (Willis 8).