Historical Marker Text
In 1775, during the Revolutionary War, this “noble spring” was part of a 10-1/2-acre tract purchased for the Fredericksburg Gun Manufactory. On this site in 1898 stood Camp Cobb, a Spanish-American War training camp for the 4th U.S. Volunteer Infantry Regiment. It was named for Confederate Brig. Gen. Thomas R. R. Cobb, killed in the Battle of Fredericksburg, 13 Dec. 1862. Because of the danger yellow fever posed to American troops in Cuba, recruiters sought to fill the regiment with men whose medical backgrounds suggested immunity to tropical diseases. The first company of the “Immunes,” as they were called, arrived on 4 June 1898. The Immunes never saw combat, as the fighting ended in July, and the camp was dismantled. [1994] 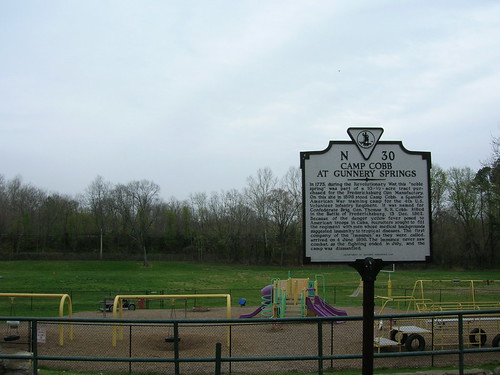 Extended Research
Camp Cobb
Camp Cobb was a U.S. training camp during the Spanish-American War, which was not even in existence for an entire year. Thus, there is little information to be found on this particular camp. What we do know is that it was the camp for the 4th U.S. Volunteer Infantry Regiment from around June 4, 1898 until August 18, 1898 (rootsweb.com). Additionally, the camp was named after a Fredericksburg war hero, Brig. Gen. Thomas R. R. Cobb. General Cobb fought in the Second Manassas and Antietam. He was killed by a sharpshooter’s bullet during the Battle of Fredericksburg on December 13, 1862, which severed a major artery in his leg (McCash 151). In honor of this great soldier a monument has been erected on Sunken Road in the city of Fredericksburg (fredericksburg.com). Also, Camp Cobb was named to honor his life and his service to the South during the Civil War.

Background of the Spanish-American War
The causes of the Spanish-American War are numerous. First of all, Cuba was being taken advantage of by Spain and Americans had heard many treacherous stories about further brutality, even after the Cuban ten years war had concluded. The U.S. government struggled between keeping their neutrality policy and standing up against this injustice. The first decision that Congress came to on the matter was to stay the course of neutrality, but to urge Spain to accept Cuba as an independent nation and also to continue to hold peace with the U.S. The battleship Maine was the final straw that pushed the United States into war with Spain. The Maine was allegedly sent to Havana to protect American citizens there and their property (Johnson 11). On February 15th, 1898, the Maine was blown up, killing 266 men and sabotaging Spanish-American relations. President McKinley and Congress declared war against Spain on April 13, 1898 (Johnson 13). 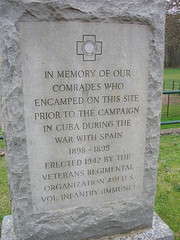 Disease in American Training Camps
American training camps for the Spanish-American War were disease-stricken. Because Camp Cobb was not in existence for an extended period of time, the typical training camp sanitation and disease problems may not have been as rampant. However, most camps struggled greatly with this problem and there were many casualties due to this preventable situation. Typhoid-fever was a very common sickness in training camps. “More than ninety per cent of the volunteer regiments developed this disease within eight weeks after their enrolment [sic]”(Alger 411). As questions of camp hygiene and sanitation continued to surface, the War Department and Surgeon General’s Office issued a warning and informative letter. They suggested being more careful cleaning the camps and in preparing foods. They suggested having punishments for those that did not follow regulations. The problem became that no one enforced the regulations even still and more casualties resulted (Alger 415).

The “Immunes”
“Immunes” consisted of American soldiers who came from tropical backgrounds. There were ten units of Immunes and four of the ten were made up of entirely black soldiers. It was thought that these soldiers would be less susceptible to the dangers of malaria and yellow fever which were running rampant in Cuba. The Immunes were a volunteer infantry and they typically came from southern origins (Cosmas 134).

Cosmas, Graham A. An Army for Empire: The United States Army in the Spanish-American War. Columbia, MO: University of Missouri Press, 1971.

Johnson, Edward A. History of Negro Soldiers in Spanish-American War, and other Items of Interest. Raleigh, NC: Capital Printing Co., Printers and Binders, 1899.

Musicant, Ivan. Empire By Default: The Spanish-American War and the Dawn of the American Century. New York: Henry Holt and Company, 1998.