Historical Marker Text
The Sentry Box (ca. 1786) is an elegant specimen of late Georgian style architecture. Brig. Gen. George Weedon of the Continental Army, later mayor of Fredericksburg, built the house and named it to reflect his military career. Upon the death of Gen. Hugh Mercer at the Battle of Princeton during the Revolutionary War, Weedon enlarged the house to accommodate the Mercer family, and Mercer’s children later inherited the property. In December 1862, the Union army built its middle pontoon crossing over the Rappahannock River just below the Sentry Box. Intense fighting occurred here, and the house was heavily damaged. [2008] 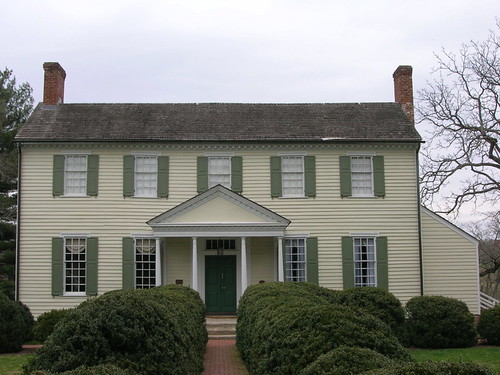 Extended Research
The Sentry Box, constructed in 1786, is located in downtown Fredericksburg near Caroline Street. The house was named by its most famous owner, General George Weedon (Embrey 135) . Weedon was proud of the home and often had elaborate dinner parties and gatherings at the house. Many looked forward to his Christmas celebrations held there (Harrison 4). General Hugh Mercer owned the house after General Weedon, and his children inherited it after his death during the Revolutionary War.

During the Civil War, the house was owned by the Mason family. Prior to the war, the owner, Wiley Mason, Jr. was a merchant and lived with his wife, Susan Mason. They had at least two children together and he was the owner of more than 11 slaves. Wiley Mason was enlisted in the Confederate army during the war and served as a lieutenant under General Charles Field. Mason was wounded and captured but survived the war (Harrison 3).

The Sentry Box is still standing today, though it is currently private property.

Significance during the Civil War
The Sentry Box was important to the Confederate side during the 1862 Battle of Fredericksburg. A Union bridge used to cross the Rappahannock was constructed near the house. Because of its location and proximity to the river, the house sustained heavy damages during the battle. Wiley Mason returned to his home after the fighting to discover five or six dead men on his property, all of which he had buried in a single grave. Confederates also dug deep ditches for protection across the yard that had to be repaired (Harrison 6).