Historical Marker Text
On the heights one mile to the west, the home of the Thorntons from about 1736. Francis Thornton 2nd was a justice, a Burgess 1744-45, and Lieut. -Colonel of his Majesty’s militia for Spotsylvania County. He and two of his brothers married three Gregory sisters, first cousins of George Washington. “Fall Hill” is still (1950) owned and occupied by direct Thornton descendants. [1957] 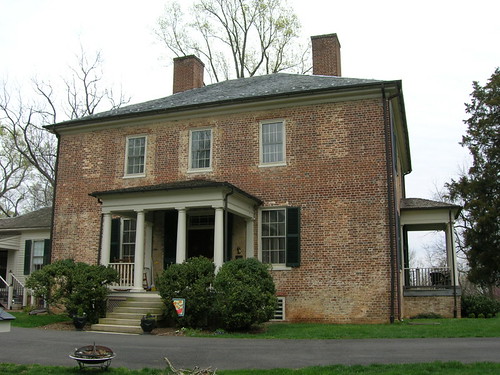 Extended Research
The Thorntons
The Thorntons were a prominent Fredericksburg family from the beginning of the town’s existence. Because the records are so old and many of the men in the family shared the same first names, it is difficult to discern which Francis Thornton actually built the Fall Hill mansion that still stands today. Many records do not agree on these facts. Rather than using numbers to refer to the various Francis Thorntons, birth and death dates will follow the name. What follows relies heavily on the most recent source, local historian Paula Felder’s Forgotten Companions: The First Settlers of Spotsylvania County and Fredericksburgh Town.

The Thornton family acquired a tract of 8,000 acres on February 25, 1720 that encompassed much of what would become Fredericksburg. Francis Thornton [1682-1752] granted his son, Francis Thornton [1714-1749], 41 acres as a gift on June 1, 1736. This Francis had already been living on the property. He built the first house on the family’s Fredericksburg property in 1735. This house, known as “The Falls,” no longer stands. The Stratford Hotel, now the George Washington Executive Center on Princess Anne St., sits on that site. The Thornton family graveyard, now owned by the city of Fredericksburg, is located behind the Executive Center (Felder 189).

Francis Thornton [1714-1749] was the most prominent member of the family. In 1734, he was elected a member of the court and the vestry. Two years later he married Frances Gregory, one of George Washington’s cousins. His two brothers, Reuben and John, married Frances Gregory’s two sisters. Francis served as a justice for the House of Burgesses from 1744 to 1745 and was the head of the Spotsylvania County militia from 1742 to 1749 (191).

Fall Hill Mansion
Francis Thornton [1737- 1795] bought an adjacent piece of land from William Fitzhugh in the 1770s and erected the Fall Hill mansion in the late 1770s. At this point the Thornton estate, referred to as Fall Hill, comprised almost 1,600 acres (189-192). During the Civil War, Fall Hill was a strategic point. General Lee created a breastwork at the bottom of the hill to guard the river. Miraculously the house was spared any damage. There was, however, a tree in the front yard whose top had been blown off by a cannon (Gordon 360). Included on the property is the grave of Katina, a captured Indian woman who came to Fall Hill in 1760 and served as a nanny to the Thornton family. She is rumored to haunt the house (Chasen). 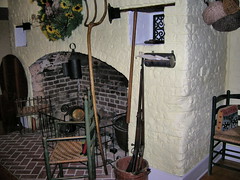 Fall Hill was built in the Georgian style. The brick mansion has three porches, front, back and side, and is two stories. The inside was extensively renovated in the 1840s and much of the interior work represents the Greek revival style (National). The mansion remained in the Thornton family until 1999. The house is listed on the Virginia Landmarks Register and the National Register of Historic Places. 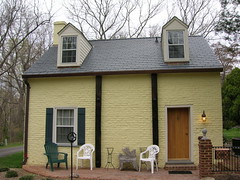